In the end of 2012, I participated in a workshop at Tranzit.hu where we performed an educational drama, ‘Where has communism gone?’ (Jurányi, 2013.) together with the Chto Delat artist group from Saint Petersburg. I would like to draw a parallel between the pictures of this performance and the photos showing my mother’s theatre performance in the 1970’s. I have found out that the latter were taken at the very first premiere of the FERRUM Theatre at Szombathely in April 1977. The play was written by József Tornai and is titled ‘Áldozati ének’ (‘Sacrifice song’). The subject matter of the play of Chto Delat is the processing of the communist past, while my mother’s pictures depict an experimental theatre that was founded during the socialism. The question is how our past defines our present, which might be distanced by time but which cannot be completely separated. On the small pictures, the above-mentioned play appears together with my mother’s photos from the theatre. Three paintings were ready to back in 2015 and I complemented these with the characters on my mother’s photos in 2017, arranging the figures in my specific composition. This way, I became the director of a play as a painter, the director of a play that doesn’t exist. Since using my mother’s photos, a bigger canvas also belongs to the smaller pictures. This is a kind of Footnote1, picturing brush strokes that otherwise, being unnecessary, would end up on the painting cloth. Thus, the two pictures are being made simultaneously.

1. This title was inspired by the novels of Péter Esterházy. 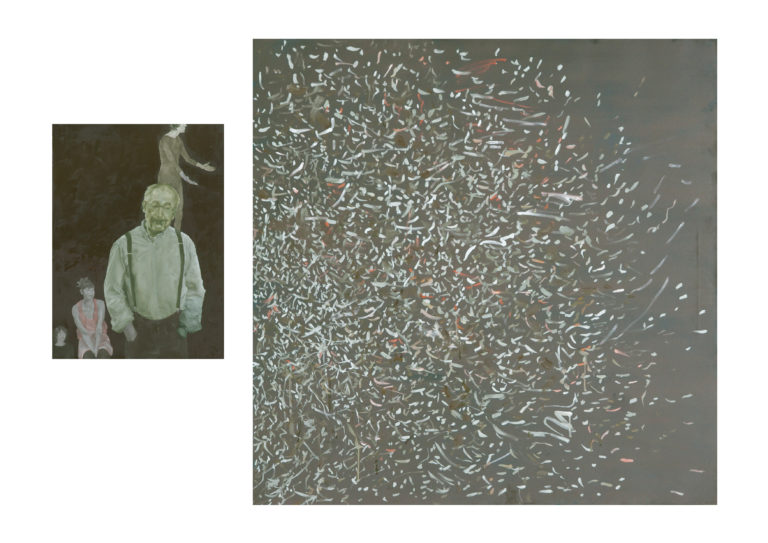